The History of Too Broke for Sturgis 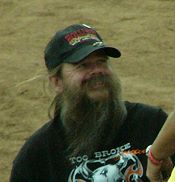 Oh where has the time gone? It was way back in 1992 when someone asked Phil Mathews (a member of Phoenix ABATE @ the time), "Are you going to Sturgis this year"? His standard reply of, "Heck no. I'm TOO BROKE for Sturgis!" kinda started it all and "Too Broke for Sturgis" was born.

Remember that first year up at the Sharp Creek Campsite, just out of Christopher Creek, when the bike games were held right out on the highway (260), cause there really wasn't much traffic back then? Everybody camped right there, just off the highway, past the cattleguard. Then the same place the following year (`93) but with the bike games back down a-ways on the dirt road held in between the rain showers. All the while, everybody helpin' and tryin' to keep the band's equipment dry. I think "Capt. Jack and Steppin' Back" was the band that 2nd year.

Remember the "Taco Bite" event? Boy, was that one ever a crowd pleaser. The "Taco Bite" was actually frozen burritos that had been thawed out, hung on a string (like the weenie bite), and then dipped in catsup (Gee, what's that visual make ya think of)! It was an event for the men! The guys would ride up under the red dripping thingie and try to bite off as big a chunk as they could without falling off their bikes. I think that it was actually some of the ladies' idea for kinda getting back at the men for the weenie bite. It took men that were real secure in their
masculinity to compete in that one!

That weekend (year 2) the kids found the little corral, down by the streambed (Sharp Creek), back farther in the woods while they were out exploring. That's where "Too Broke" moved to for year three, which was when they (the kids again) found ParaDice Meadow (the old BLM Landfill) up the hill, still farther back, and an even better location. "Too Broke" moved there for year four (and then five, six, & even seven, I think). Then, with the change in ABATE leadership, the date was changed and a new location was found over at Watson Lake in Prescott, where we stayed for two or three years. In 2001, Too Broke For Sturgis (would've been the 10th Annual) was canceled at the last minute due to logistical entanglements with the City of Prescott. And now we are at Mormon Lake (for five years now).

So that little Chapter event started out with a few folks getting' together to roll meatballs, for a Friday Night Poker Run (initially put on by Phoenix ABATE). The idea was to get out of the valley and escape the heat during the last weekend of the "Sturgis" Rally. Then just spend the night, play some games, have a spaghetti dinner on Saturday, and just basically hang out in the cool pines up on the Mogollon Rim for the rest of the weekend. Since then "Too Broke" has evolved and grown.To become one of Arizona's most anticipated annual motorcycle events.

Now, what more could you ask for in a motorcycle event? Great riding, beautiful scenery, fantastic people, a poker run, bike games, people games, a 50/50, food, friends, libation, the great outdoors, and live music. Course Arizona's MRO's (ABATE and MMA) show up, but so do all kinds of other groups and organizations from the CMA to most all of Arizona's Motorcycle Clubs along with lots and lots of independent riders and families.

Originally attended by 60+ motorfolk, "Too Broke" has evolved into a major Annual Event Weekend, which is now presented by ABATE of Arizona, and is attended by folks from all over the southwest. Whew, man we've come along ways.